Endodontic surgery, typically referred to as surgical root canal or apicoectomy, is used to treat apical periodontitis in cases that did not heal after nonsurgical re-treatment, or, in certain cases, primary root canal therapy with persistent intracanal infections after iatrogenic changes to the original canal anatomy,persistent microorganisms in the apical foramen, extra-radicular infection (including bacterial plaque on the apical root surface) or persistent bacteria within the lesion itself. 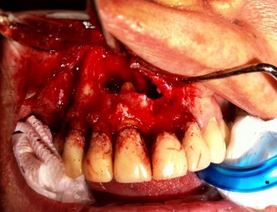 This case pictured here is based on a 60 year old female who presented with a chief complaint of pressure sensitivity on teeth #7-#10 and a history of a draining sinus tract.

At the time of the visit, there was a fluctuant, palpable swelling in the maxillary buccal vestibule above teeth #8 and #9. The radiograph showed preexisting root canal treatments on #8 and #9 which had been completed within the last four years, and a large radiolucent lesion extending from teeth #8-#10. The treatment plan presented to the patient was surgical root canal therapy to eliminate the source of infection.

The procedure began with elevation of a full mucoperiosteal flap with one vertical releasing incision. This image above demonstrates the preexisting bone loss following elevation of the flap. A well-encased epithelial cyst was removed from the osseous crypt and sent for biopsy. Tooth #8 was resected at a 90 degree angle to ensure accurate elimination of bacteria harboring lateral canals most commonly found in the apical 1/3 of most canal systems. Staining and microsurgical inspection was completed to view for missed canals or fractures. The retro-prep was completed using ultrasonics and sealed with MTA retrofill. The site was grafted, a resorbable membrane was placed, and the flap closed.

Four weeks following apical surgery, the patient returned to her general dentist for restorations on Teeth #7-#10. At both her 3 and 6 month recalls the patient no longer presented with any clinical symptoms and radiographs revealed substantial maxillary bone fill.

What the literature shows us today is…

For many years, traditional surgical root canal therapy involved utilizing surgical burs and amalgam as a root-end filling material. Today, modern techniques utilize a 90 degree apical root resection and incorporate the use of ultrasonic tips and more bio-compatible filling materials including IRM, SuperEBA and MTA. The use of microsurgical instruments, high-power magnification and illumination allows for greater accuracy than traditionally used methods. Despite these advancements, the traditional techniques are still being used in the oral and maxillofacial surgery community.

Fill out my online form.