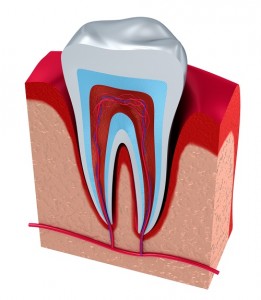 Root resorption is a dental condition caused when the body’s odontoclast cells dissolve the structure of the tooth. Odontoclasts are multinucleated cells responsible for producing resorption lacunae. Although this is the natural process for the loosening of primary teeth to allow the permanent teeth to emerge, when root resorption occurs in adults, the condition is troublesome. Injuries to a tooth can cause resorption to occur.

The process of breaking down (resorption) and adding (deposition) are processes that allow the body to maintain balance. When referring to bone, this process is a response to the normal pressure and tension placed on the bones. In fact, the process of resorption and deposition allow teeth to be moved via orthodontic devices; nevertheless, once adult teeth are formed, they do not usually resorb.

Pain may occur when the tooth is tapped or chewed on; however, slowly applying pressure is usually not painful.

Resorption begins on the outside of the permanent tooth and moves inward. This is the most common form of resorption in permanent teeth. It is caused when the periodontal ligament sustains an injury.

Resorption begins on the inside of the permanent tooth. Inflammation begins in the pulp space; dentin is lost and there is the possibility of invasion of cementum.

ECR refers to resorption beginning at the neck of the tooth, which is located near the gum line. For the most part, ECR affects the upper incisors and canines and the first molars on the lower jaw. Because initially this condition can be painless, ECR frequently goes undetected for some time. Generally, it is found on routine x-ray examinations. During the early stages of ECR, pink spots may appear on the damaged enamel. These spots consist of the pinkish cells responsible for damaging the tooth. As time passes, the pink spots progress, turning into cavity-like areas. Think you may need a root canal in Houston? Root resorption is a syndrome.

Fill out my online form.